Today I logged into a Yelp Business Owners dashboard and saw a new section for “Special Hours”. Jack Jostes & I feel are in agreement that this “of utmost importance” for walk-in storefront businesses such as restaurants and retail shops. Yelp announced this on Dec 12th.

Yelp is keeping up with Google on this front since Google began including special hours in their business listing dashboard earlier in 2016.

Here’s how it looks on a Yelp listing of a business listing savvy enough to use it. Hint: It’s a coffee house in San Francisco with over 1700 reviews. Incredible! 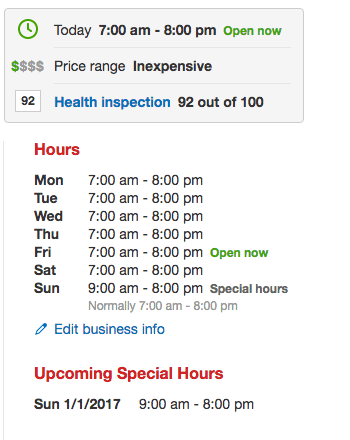 Yelp is keeping pace with Google, and in many ways WAY ahead of Google with it’s robust list of business attributes and customer interaction functionality. Yelp is awesome! What do you think? Do you love Yelp?